Must have attended the recent COP(out)26 in Glasgow!
P

Although we do happen to have a fossil employed in bindery.
S

Shawnd said:
I can 100% assure you we run on all electric!
Click to expand...

Exactly!
Many people don't realize where their electricity comes from. So they think they're green when they may not be. As an example, in Maryland where I believe you are located: the State's electrical energy production involves natural gas (37%), nuclear energy (38%), coal (14%) and petroleum. Oooopsie!
To be fair 11% comes from hydro power in that state.

gordo said:
Exactly!
Many people don't realize where their electricity comes from. So they think they're green when they may not be. As an example, in Maryland where I believe you are located: the State's electrical energy production involves natural gas (37%), nuclear energy (38%), coal (14%) and petroleum. Oooopsie!
To be fair 11% comes from hydro power in that state.
Click to expand...

Here's the entire us for comparison: 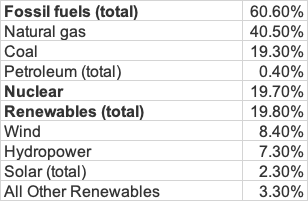 How many windmills or solar panels with a Battery bank the size of a small city take to run a digital only printing company? Do we really need so many huge digital/offset printing companies? Do we really need junk mail delivered by non-electric vehicles? Will the huge companies that sell print machines include solar panels and a windmill? Think about a global ban of fossil fuels. What impact will that have for you?
C

smalloffsetpressexperts said:
Think about a global ban of fossil fuels.
Click to expand...

This will never happen: because people need energy…

… and, above all, because coal-oil-gaz sellers will never renounce to the huge sources of profits that the fossils energies give to them!

Meaning that in the next years, whatever the decisions of the COP (or any other bla-bla-bla useless meeting) will be, whatever the consequences will be, even if it leads to million people dying and even if it causes the destruction of the planet Earth, we will burn all the oil we will find to the last drop, all the coal to the last grain of coal-dust, all the gaz (any burnable gaz) to the last atom, allowing these oil/coal/gaz companies to make as much profits as it is possible.
S

So you think our global leaders are all mouth, no action? The Green New Deal and Greta Thunberg blaming fossil fuel companies for our Planets Demise are in-correct?
C

The basis of capitalism is that only money and profits matter… the rest, including the planet and the people, has absolutely no importance and can be sacrificed.

With that in mind, look at the today's world: money really rules everything, so as long as there is money to be earned by extracting, selling and burning fossil fuels there will be companies that will make huge profits with fossil fuels without any care about what Green New Deal and Greta Thunberg could say.
And as our global leaders have absolutely no power to shut down private oil/coal/gas companies, they can say whatever they want, they in fact have absolutely no power and no possibilities to take action.

And as it will not be enough to feed the world's greedy needs for energy, we also will "burn" all the uranium we can find, in nuclear powerplants that are time bombs waiting to explode: one (Three Miles Island) has nearly exploded, only releasing a radioactive cloud in the atmosphere, but two of them (Chernobyl and Fukushima) have already exploded, making hundreds of deads and thousands of sick people…

Your country (I assume you live in the USA?) learned lessons from the Three Miles Island accident and initiated an halt in the development of nuclear power in the USA, confirmed by the Chernobyl accident 7 years after: that's probably why the nuclear power is only a small part in the production of electricity (previous posts stated between 20 and 38 %).

My country didn't learn any lessons from these accidents! After each of this 3 accidents, EDF (the historic french handler of electricity powerplants, including nuclear powerplants) claimed that this kind of accidents could never happen in France, for various (and obvious!) reasons. They even claim that the Chernobyl accident had no consequences in France because the radioactive cloud coming from Chernobyl that contaminated Germany didn't pass through the border between Germany and France!!! And most people were dumb enough to believe this BS !!!
Simply sweeping the toxicity of nuclear wastes problem under the rug, EDF's propaganda also claims that nuclear energy is perfectly clean and totally green, because a nuclear powerplant has no CO2 emissions, basing a part of it's propaganda on the fact that the clouds coming from the cooling towers of nuclear powerplants are not smoke but only steam to proove that nuclear electricity is the cleanest energy… even cleaner than windmills !!! And most people are dumb enough to believe this BS !!!
Today, in France 80% of the electricity come from nuclear powerplants, and the french government has no intention to decrease this proportion, even planning to built some more during next decade, again because huge amount of profits are at stake: EDF sells electricity to all the countries around France*, and with the development of electric cars (which in France are in fact nuclear cars), western Europe will need more and more electricity and EDF wants to be ready to supply and make huge profits.

* how do you think that Germany is stopping their nuclear powerplants (initiated after the Fukushima accident)? They try to reduce their needs a little bit, they build windmills, they burn much more coal… and they buy (nuclear) electricity from EDF!!! That's NIMBY syndrom…

claude72 said:
The basis of capitalism is that only money and profits matter… the rest, including the planet and the people, has absolutely no importance and can be sacrificed.
Click to expand...

That actually describes socialism perfectly, not capitalism. I'm saying it as someone who grew up in the Soviet Russia. Except that socialism destroys both the planet and the people without even making any profits.

Capitalism is the only system that actually genuinely cares about the environment to a large degree.
C

zevrix said:
That actually describes socialism perfectly… Except that…
Click to expand...

"Perfectly" + "except that"…: basically speaking, if there is an "except" that", it means that it is not "perfectly"!!! That being said, I didn't live in USSR in the days of communism, so I don't know how was the life, and I will not argue about it.


Capitalism is the only system that actually genuinely cares about the environment to a large degree.
Click to expand...

Are you kidding, or are you blind, or are you living on a desert island since 40 years without any communications with the rest of the world?

Obviously, as you can post on a forum, it means that you don't live on a desert island, so simply look around you and behind in the past, and you'll see that the history of western capitalism countries is full of situations having led to hundreds, thousands, millions and more of desperations, illnesses and deaths caused by greedy capitalist companies which have made -and still make- huge and huger profits by cutting corners with safety, regulations, pollution, leading to accidents and/or making people sick to earn more money for their share-holders… without any consideration for the people they harm/kill and the environment they destroy, and without anybody stopping them.

And, worse, some of them deliberately manufacture and sell products that they know to be lethal/dangerous to people who buy/use their products, also without any consideration for the people they harm/kill and the environment they destroy, and without anybody stopping them.

To rephrase my reply more accurately:

History has demonstrated that, when it comes to protecting the environment, capitalism is the best economic and social system compared to other known systems. It's not perfect but other systems are much worse.
C 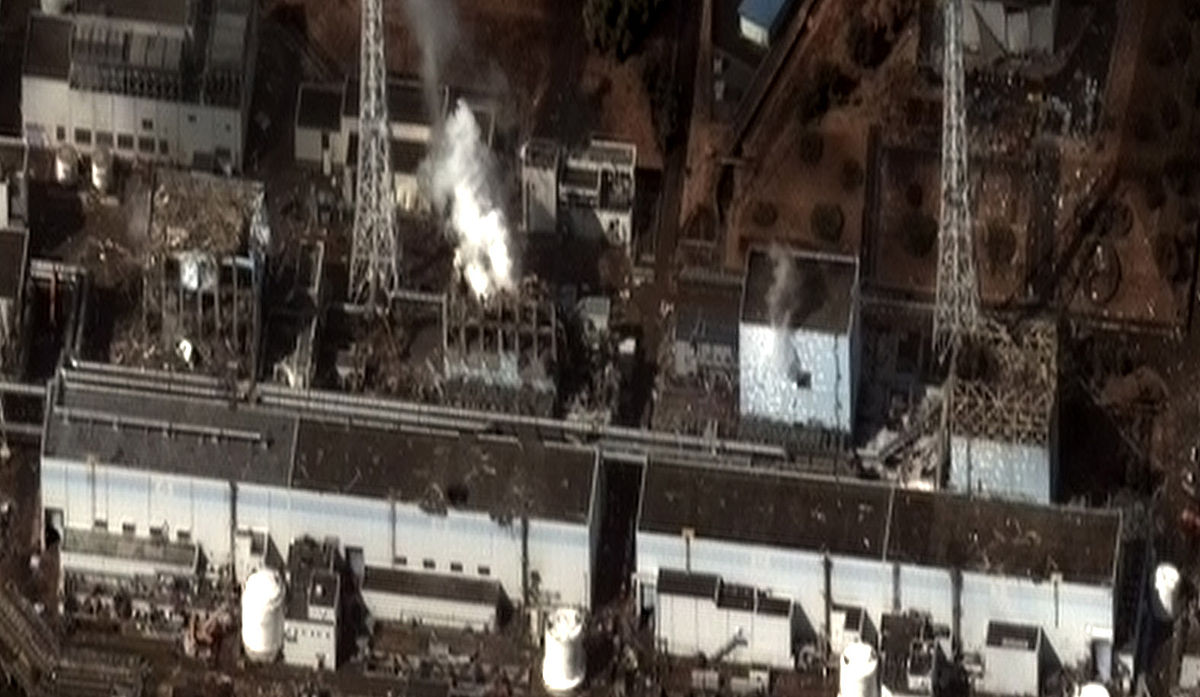 en.wikipedia.org
(click on the links to have specific informations about the most infamous products from Monsanto and their effects: agent orange, aspartam, bovine growth hormone, roundup, OGM seeds… some of them still in production, despite their prooved toxic side effects)
S

Claude72 what is your solution to fix our climate problem? It seems like fossil fuels are being hoarded by the USA. Pipelines shut down etc. Do you think there is a true source of clean energy? Lithium mining: What you should know about the contentious issue

Electric cars are significant contributors to climate protection – but the mining of lithium for the batteries is often criticized. The discussion focuses on the extraction of raw materials in salt deserts. Questions and answers. ...

I'm not sure that there is a solution???

As I said before, people need energy (often to waste good part of it!) and greedy companies will not renounce to the huge profits they make by extracting/transforming/selling fossil fuels…
… so we will burn all the oil, coal and gaz that is left in the planet Earth, meaning that we will produce all the CO2 that it is possible to produce with the amount of oil/coal/gaz that is left to be burn, whatever the consequences will be.

The only source of energy powerful enough to replace fossil fuels is the sun: everyday, the sun provides 10 times the energy needed by each inhabitant of the Earth… except we actually don't know how to fully use this energy, and how to store it for the night. Solutions are experimented, but are not yet ready to be in production.

Today there is no cleaner energy source powerful enough to replace all the fossil fuels, so the only possibility is to delay the problem, by trying to save as much energy as it is possible, which means radical changes in our way of life and in the way that global industry works… but no one is ready for these changes!
S

Well said! Good conversation. Very scary times.
You must log in or register to reply here.