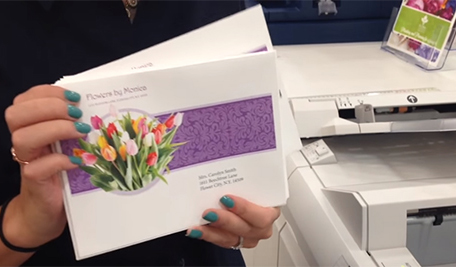 Rockford Litho Center (RLC), Rockford, Ill., has differentiated its business in recent years by helping its customers make the most of their envelopes’ communications value.
A key to developing this capability: moving from offset envelope production to full-color digital, where envelopes can be produced as efficiently and simply as standard print jobs. RLC now has lower production costs while providing new value: color matching that improves branding, personalization that grabs attention, and faster turnarounds that improve timeliness.

RLC is not alone. A December 2018 survey of the largest in-plants in the United States by In Plant Impressions magazine found that digital envelope printing equipment was No. 1 on the respondent’s technology acquisition wish lists. Some 42 percent cited plans to acquire the technology in 2019.

A One-Stop Shop
RLC is a general commercial printer of everything from postcards to bound books, produced on a fleet of offset and digital presses. One specialty is short-run, quick turn jobs, which get especially intense around political elections, holidays and charitable appeals seasons. The firm also leverages its broad capabilities to serve as a one-stop print shop for many customers.

Offering envelope printing has been part of the one-stop-shop mix for many years, initially on offset presses. Lynn Perry, RLC chief executive officer and owner, explained how that changed about 12 years ago: “Runs were coming in at 500 to 1,000 each, but we still had all the set up for offset envelops for each of those shorter runs. When digital became available, that’s when we moved because of less waste, shorter set up and better turnaround.”

At the time RLC was one of the first digital envelope printers in the country. The big advantage then was turnaround time. Perry: “We couldn’t do those schedules if the work wasn’t digitally printed. It’s still cheaper than offset to print 500 to 1,000 envelopes on digital, and we don’t waste a lot of envelopes to get them done.”

Initially, most of the jobs were for one or two colors. “Being able to offer four-color envelopes and personalization were bonuses,” Perry explained. “That wasn’t what we were thinking about, but once we were doing digital, we could tell customers we do four-color anyway, and you can do more with it. Bonus!

“Once marketers start doing four-color work, they don’t want to give it up,” Perry noted. “We can add graphics to envelopes, and now clients won’t go back to offset. Those customers are locked in.”

Differentiating With All Digital

Today, RLC prints all its envelopes digitally—30,000 to 100,000 envelopes a month—and markets the capability. “We have a capability that others don’t, and it doesn’t cost any more to do it,” Perry said. Some marketers see the value of the enhanced envelope right away, he said, but others need educating.

RLC focuses its envelope marketing efforts on businesses whose work with the firm is growing and includes envelope production. “Political campaigns use envelopes,” Perry noted. “So do other clients who also use lots of postcards, especially for fund raising. The appeals market fits this model, and having the ability to do envelopes helped us.”

RLC was also helped recently by acquiring a new digital envelope printer when its existing printer wore out. “We didn’t want that same kind again because it didn’t handle everything we needed,” Perry said. “We wanted to upgrade.”

Their search led them to the Xerox Versant digital press, a full-feature press that also prints envelopes out of the drawer or top tray. “We tested the Versant for three weeks running 80,000 envelopes. Other systems and envelope feeders couldn’t keep up,” Lynn said, and there was no price point difference from other equipment they looked at. Throw in the Versant’s utility in general production, and he says it’s “the most versatile machine on the market.”

Along with the press, the RLC acquired an optional Customized Envelope Feeder and Conveyor with load-while-run envelope feeding to ensure fast turnaround. With older methods, Lynn said, “Operators needed lots of patience, because they would put 50 envelopes in a drawer, sometimes 150, and every time we have to refill, there’s a pause. So it took a long time.

“Now we can load without having to stop the machine,” he went on. “The productivity is important, because it allows you to print more. We can print 500 envelopes in 11 minutes out of the feeder, something we could never have done before. It would take 20 minutes if we did envelopes the other way and assuming it all went smoothly. Whenever there was a misfeed, it was at least two minutes before the print job started up again.”

On one recent day the firm printed 12,000 envelopes, something “we couldn’t do out of a drawer or top tray,” he said. He finds the Versant quick to set up and to change envelope size. “We had three different sizes on those 12,000 envelopes, but it took just a few minutes. That’s the value.”

Another benefit of the Versant is its capability to print on sheets as large as 26 inches long, enabling production of multiple pieces of an appeals campaign, maximizing every inch of the materials. “Every appeal has two envelopes, sometimes a reply card, and the whole job could be done on one machine because of the long sheet,” Perry said.

The big takeaway, though, is that Rockford Litho Center now makes envelopes as efficiently and simply as standard print jobs. Moreover, Perry said, “Now we bring turnaround and value-add to every job, because we can design better envelopes without costing any more money.”

And that’s how you push the envelope.