Beyond the Press: Defining the Infrastructure for Operational Success

Status
Not open for further replies. 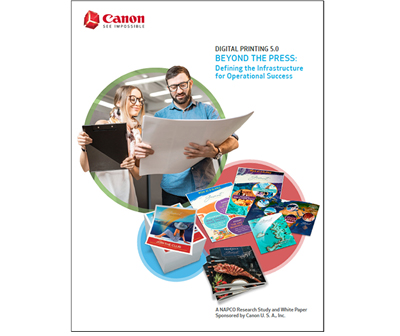 [Download Digital Printing 5.0: Beyond the Press: Defining the Infrastructure for Operational Success ]

So you pulled the trigger and put the big new printer on your shop floor. But success is not about the box. What makes a bottom-line difference is how you meet the challenge of customers’ budgetary and quality expectations while ensuring profitability. The latter underscores the importance of understanding how operational costs and production overhead impact profitability. This report shows how the worries that keep you up at night are shared by many other business owners—and what the best ones do about it.

Two pain points always come up when I talk to printers: Staffing and smart use of automation.

Staffing
Staffing issues make business owners a bit crazy. There are a host of reasons for this. Some of it is the dearth of attention being paid to the printing industry at vocational schools. Some of it is simply getting good people who show up on time. But it can also be the lack of a career path from shop floor to the corner office, or at least to a management role. No one wants a dead-end job, and nearly everyone wants to feel valued and see a path forward. This is human nature.

The second installment of a five-report series from work done on Canon’s behalf by NAPCO Research showed that most print business owners hire staff from competitors and/or recruit from within, such as re-training analog press operators to run digital presses. Some seek out individuals with an interest in printing and training them on the job. Others recruit sons and daughters of owners and employees. But many business owners I’ve talked with tell me any strategy can be stymied by workers looking to other industries for their future. Sadly, there are those who don’t see putting ink or toner on a page as a magical process.

Another admittedly harder approach is finding and hiring people who are interested the software and hardware technology that empower modern print businesses. In traveling around the U.S and in conversations with print business owners, I’ve found that some put younger employees (including their own children) into roles where they are responsible for using technology. Such roles are often within a younger person’s comfort zone and the positions are ones in which they feel they can grow. These “resident geeks,” as some business owners term them, often have the technological prowess that enables them to contribute to a company’s success. This can be critical to job satisfaction for many Millennial employees.

The A-Word
This gets directly to the second point. Comfort with technology can be especially important with respect to automation software, which is one of the greatest drivers of success in modern print businesses. Ultimately, it is software that lets a business owner deliver work that delights customers and helps a business run more efficiently and profitably. Software is also the key driver for profitability by reducing production overhead, running costs, waste, and employee overtime.

The Digital Printing 5.0 NAPCO Research shows that automation software is key to success. Print shops reporting high sales growth claimed higher degrees of automation than those with less automation. In contrast, only 11% of firms with flat sales claimed to be mostly automated, and among companies where sales declined, a mere 5% said they are mostly automated. Commercial printers with flat or declining sales also had greater dependence on all-manual processes. These are key indications that automation can be a significant driver of profits.

Starting Points
Automation can, and should, begin with job submission, yet nearly a third of commercial shops and some four in ten in-plant printers participating in the research cited job submission as a workflow challenge. This indicates too many jobs may still be arriving on thumb drives or email—requiring extra steps by busy CSRs— rather than via digital storefronts with automated job ticketing that can route jobs directly to prepress. This means commercial printers will be unable to advance their capabilities unless jobs are submitted through storefronts that support a “web-to-workflow” solution. On one hand this is a competitive issue, but automation also eliminates the time sinks of manual tasks associated with accepting, processing and preparing orders before they land in prepress.

Other key challenges that can be addressed by automation include managing the growing volume of small jobs and achieving faster turnaround times. Another is working with legacy or old software systems. To see how this affects your company, run the numbers to see how quickly the time spent each month working around old software can be overcome by implementing new software that is part of an automated workflow.

Redefining roles
Circling back to the first point, automation can actually simplify the roles of people are hired for what used to be called entry-level jobs. Many of the most effective automation tools in use today are designed by people who have a less than intimate acquaintance with printing, but who are learning how all the moving parts of print jobs come together. These people still need to work independently and develop an understanding of the overall process. Automation streamlines the operation.

One thing I’ve noticed in my travels and conversations is how nearly all print applications and workflows benefit from automation from job submission through finishing. Business owners tell me that properly implemented automation equates to business growth. This second report goes into detail on these issues while showing how high-growth print providers are lowering their production and running costs through automation. It is worth your time, and that of your operations and production managers, too.

Take a moment to download Digital Printing 5.0: Beyond the Press: Defining the Infrastructure for Operational Success.
Last edited by a moderator: Jan 6, 2020
Click to expand...

Spanning over 25 years in digital printing, marketing communications and market research, Noel has edited four leading printing industry magazines and advised leading vendors, franchisors and independent print providers on nearly all aspects of digital printing. He has written hundreds of articles, blogs, and is a frequent speaker at industry conferences and at vendor-sponsored customer events. He has created numerous white papers, case studies, and produced promotional and training videos for industry leading companies.

Regardless of the medium or venue, Noel's primary focus is on communicating ways companies can use digital printing as a driver for business growth, productivity and efficiency.

Status
Not open for further replies.

How’s the Cloud Working for You?