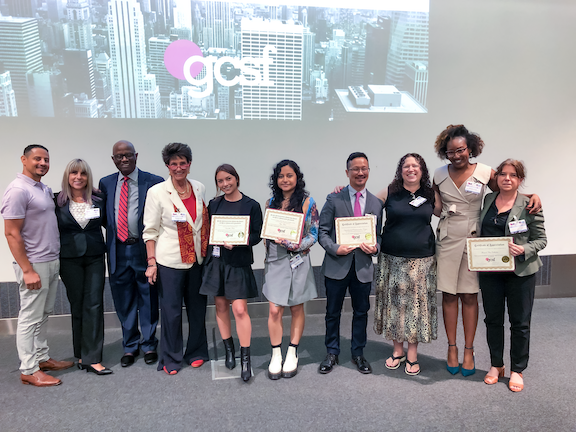 The Graphic Communications Scholarship Foundation (GCSF) returned to center stage with the scholarship awards ceremony it hosted in New York City on June 22 – its first such in-person event in three years.

Diane Romano, president of GCSF, acknowledged that COVID-19 had temporarily slowed down the group’s efforts to support young people from the New York City metropolitan area who are enrolled in graphic communications study programs. “But we never stopped working on behalf of the students, and now we are back in full force,” she declared.

GCSF marked its reappearance by awarding cash scholarships to four students and presenting cash stipends to one school and two organizations that train people for careers in graphic communications. The evening’s grants totaled $20,500, bringing to $1.2 million the amount of money that GCSF – an all-volunteer, nonprofit 501(c)(3) entity – has raised and contributed in the cause of print industry education since awarding its first scholarships in 2002.

Joining GCSF for the ceremony was the Advertising Production Club of New York (APC-NYC), which endowed one of the four student scholarships in honor of the late Judy Salmon, an APC-NYC past president and member of the board. The event took place in space provided by Grey Global, a leading advertising agency, at its New York City headquarters in Manhattan’s Flatiron district.

This year’s student scholarships are the latest of the more than 450 individual grants that GCSF has made to date. The 2022 recipients, their schools, and their awards are:

The award honoring Judy Salmon is the most recent cooperation on behalf of graphics studies between GCSF and APC-NYC, which has contributed nearly $280,000 in support of scholarships over the years. Co-presenting it were Eloise Martinez, APC-NYC treasurer and board member, and Paul Nicholson, board member. Both spoke of the scholarship’s namesake with affection and respect.

“You never saw her without a smile,” said Martinez, citing Salmon’s long record of dedicated service as a member and an officer of APC-NYC. Nicholson, her manager at Showtime, called her “the most enthusiastic print producer I’ve ever seen on the planet.”

John Aaron, a member of GCSF’s board of directors, presented a grant to the Women’s Press Collective (WPC), a Bronx-based organization that teaches people how to print in support of grassroots advocacy campaigns in their communities. “Gutenberg probably would have been pretty impressed” by WPC’s efforts to make the craft of printing accessible to the public, Aaron observed.

For the last 21 years, the Annual Citywide Graphic Arts Competition has invited New York City high school students to showcase their best work in graphic design, packaging design, digital illustration, photography, and other creative categories. Presenting its award, GCSF board member Ellen Hurwitch noted that the 2022 competition hosted more than 100 students and distributed prizes worth over $4,500.

This year’s competition took place at New York City College of Technology (City Tech), where the Department of Communication Design has become the recipient of a 2022 grant from GCSF. Located in Downtown Brooklyn, City Tech is a unit of City University of New York (CUNY) and has a long history of offering degree programs in graphic communications.

Accepting the grant award from Hurwitch, department chair Daniel Wong said that the funding would be “an immense help” in creating a new research design center, covering students’ contest entry fees, and otherwise assisting them in pursuing their studies. He noted that CUNY is consistently challenged for financial aid and that little of what it does receive trickles down to a level where it can be used to help students directly.

Wong’s department presently serves 500 students preparing for careers in graphic design, advertising, motion design, illustration, and web design. He pointed out that those in their third year of study are only now starting to find out what in-person college learning and campus life are like because of restrictions imposed by COVID-19. The challenge, Wong said, is to give them the kinds of experiences that college students ordinarily would expect at this stage of their educations.

Providing that kind of help is what GCSF exists to do, according to Romano. Through scholarships, mentoring, and training, “our goal is to assist students in accomplishing their goals, and build the graphic communications workforce.”

“The future is in the students,” Romano declared, calling upon the industry and corporations that rely on graphic communications to support GCSF with their donations. This year, the business benefactors include Candid Worldwide, brilliant:, Mohawk Fine Papers, Neenah Paper, and LB Graph-X & Printing Inc.

Because it works without professional staff or dedicated office space, GCSF has virtually no overhead expenses. All of the money it raises passes through to students as scholarships and to qualifying organizations as cash grants. To donate, and for further information, visit Donate – The Graphic Communications Scholarship.
You must log in or register to reply here. 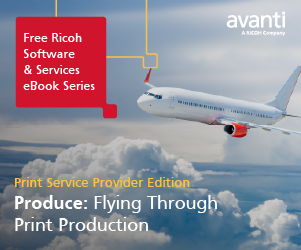