Is there a way to launch PitStop automatically when Acrobat starts?

You can make PitStop open automatically when your computer starts up by adding it to the startup menu.
S

I could set Acrobat to start at launch via startup item (windows) or login items (Mac). Not sure what item I would use to launch PitStop when Acrobat launches.
K

I'm doing this on a Mac, but it's a bit of an ugly hack and fairly complicated.

I have an Acrobat javascript that runs when Acrobat starts, but Acrobat javascript can't execute external code due to sensible security restrictions. So it makes an HTTP request to a perl script running in the background that starts up at boot time. The perl script then executes an applescript file which sends cmd+option+I to open the inspector window (which starts up Pitstop). It also opens up action lists, Acrobat's output preview and preflight windows then sizes and positions them where I want them. It calls a command line program called cliclick to do some of that, but cliclick wouldn't be necessary to just open up the inspector window and start Pitstop. So it's Acrobat JS > perl HTTP server > applescript > cliclick. I can give some more details if you want to go down this path.

EDIT: Acrobat javascript should be able to invoke menu items, so to just start up Pitstop I think you could have it invoke something like Pitstop Pro > Action Lists.
Last edited: May 21, 2019
S

A bit surprised an Enfocus person hasn't chimed in, (either way). Anyway, thanks, we'll give it a try.
K

I've attached a javascript file for Acrobat that should do it. You'll probably need to check some boxes in Acrobat preferences > JavaScript for this to work. After you unzip it, Ctrl+click or right click on the Acrobat application and select "Show Package Contents," then go to /Contents/Resources/JavaScripts and place the attached .js file in there.

I'm on Pitstop 12. It's possible something changed in one of the later versions that would prevent this from working. There is a delay value set in the top line that may need to be increased if it doesn't work.

I'd give it fair odds that this would work on Windows also. The script would probably go somewhere like C:\Program Files\Adobe\Acrobat DC\Acrobat\JavaScripts

Thank you Kyle. That work perfectly on the PC (Pitstop 2019). I did tweek it to have it open to the Global Changes, but that was an easy change. Now if I could only have the Pitstop tool palette open as the default.
K

Do you mean the inspector palette, or the place where you see things like the eye dropper and the "edit path" tool?

On my version, the inspector is strangely missing from the menu bar, even though the "PitStop Pro" menu flashes when I press cmd+option+I. If it's the inspector you want and it actually appears in your menu bar, there's a way to find out how to invoke it.
N

pitstop is my goto "tool", so i would love if Acrobat opened like the attached photo. AND when every you revert, pitstop toolbar closes, which is a pain. 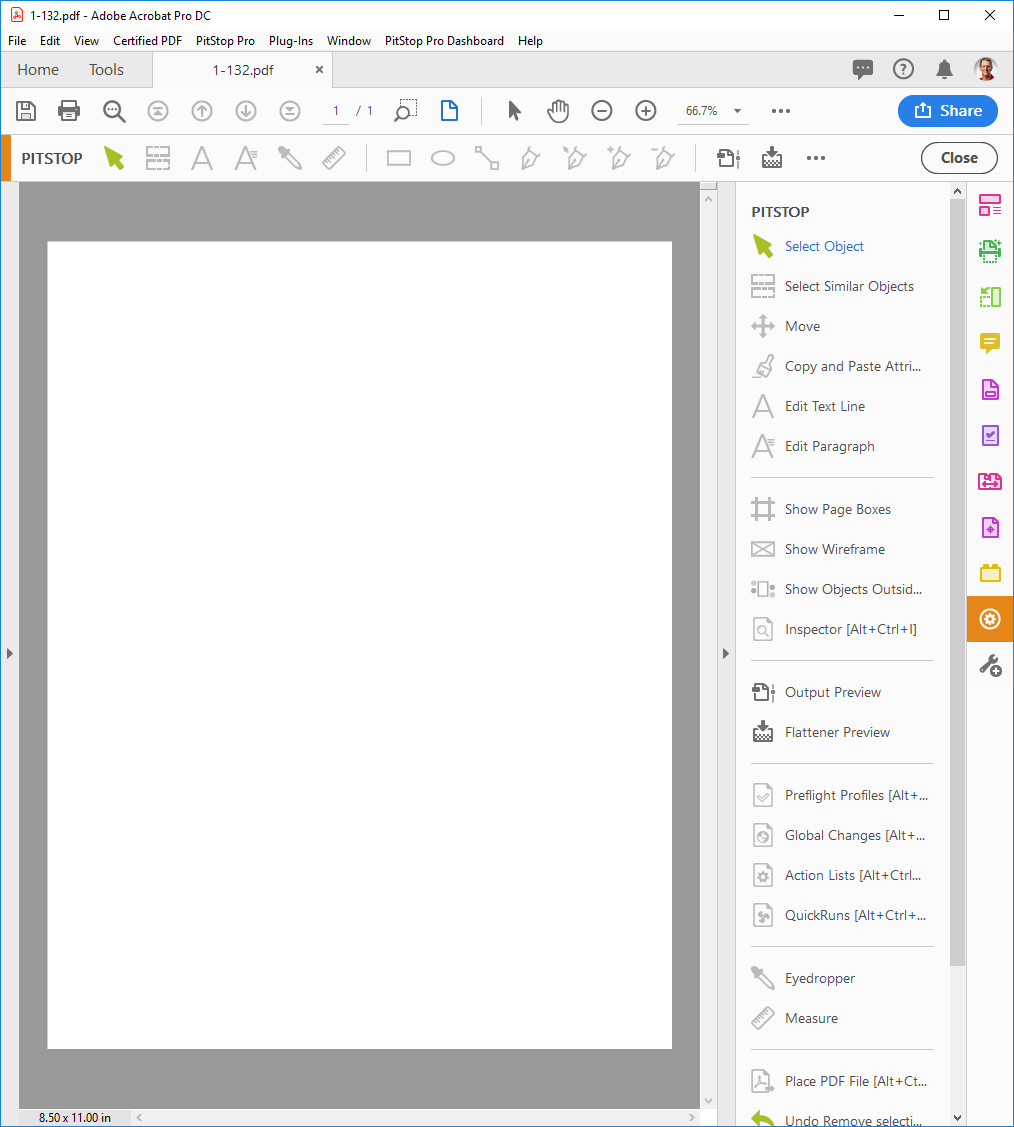 That might be doable. The method I prefer is to put all of the commonly used Pitstop tools in the "quick tools" toolbar (View > Show/Hide > Toolbar Items > Show Quick Tools/Customize Quick Tools...). I have about 16 things there and rarely need to open the tool panes. I still miss the older versions of Acrobat with toolbars that weren't glued to the document window. In the good old days, I could devote most of the primary monitor to the document and have most everything I needed a click away on an adjacent monitor.
S

The js is working nicely. Much appreciated.

Your script works for me as well. Using Pitstop 2019 with Acrobat XI.

Thank you,
pd
You must log in or register to reply here.